#LOVEBRISTOL – A RETURN TO THE CITY

We’ve teamed up with Bristol 247 to record the return to the city. Together, we’re creating a series of films capturing the sentiments of people returning to the offices, shops, bars and restaurants. 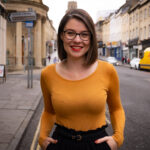 We’ve teamed up with Bristol 247 to record the return to the city.

Together, we’re creating a series of films capturing the sentiments of people returning to the offices, shops, bars and restaurants in the city centre. Thousands of students have now returned, while offices of all kinds welcome back their teams after months of home-working.

Throughout 2020 and 2021 we’ve spearheaded the award-winning #LoveBristol campaign, which has been working with businesses and organisations across the city to send a message of joy to residents and visitors alike. The campaign began with the painting of 375 love hearts on the city’s parks, hosted the Bristol Adventures light trail in Winter and this year has seen light up love songs strung over the city streets as well as disco balls appearing on some of Bristol’s iconic late night and dining establishments.

This project sees community reporters work with filmmakers to interview Bristolians and visitors as they enjoy the city centre’s leisure and hospitality scene, which is growing in fame as one of the foodie hotspots of the UK.

The pandemic has meant we all have a collective experience but as we are now in the final stages of reopening there are some lovely stories of people's first experiences of returning to places they love in the city centre. We felt it was important to record some of those moments while also giving an insight into what is fantastic about the city to those who are yet to venture back. We have been great at working together as a city to support our businesses while also keeping each other safe and we hope that continues into the winter months.

Head over to our social channels to let us know what you’ve enjoyed about your return to the city centre by sharing with #LoveBristol, sending a message of support to the city centre businesses which have kept the area going during the last 18 months.

Join our team as Marketing and Project Assistant Intern.