Roses are red, Violets are blue, Bristol is gleaming and it’s all thanks to you! 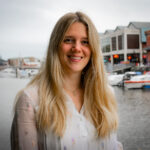 Love is in the air this Valentine’s Day as Bristol City Centre BID shows some love for the hardworking Cleansing Team on their three-year anniversary working in the city.

The rapid response Cleansing Team was introduced on 14th February 2019, with the aim of supporting levy paying businesses with street cleansing challenges that directly impact their businesses, whilst also improving the appearance of the city’s streets. Now operating seven days a week, the team meets the cleansing requirements of the levy payers by deep cleaning pavements, doorways, street furniture and business frontages to make the city more welcoming and looking its best.

This Valentine’s Day, we’re recognising the team’s hard work and showing appreciation with an ode to the dedicated team of three and some Valentine’s treats to say a heartfelt thank you!

In the last three years, the Cleansing Team has collectively delivered 19,000 hours of additional cleansing and removed over 4,200 graffiti tags from businesses properties across the city centre. Their hard work is part of a coordinated street cleaning approach and adds to the street sweeping and litter removal carried out by Bristol City Council. Their two specialised cleansing vehicles have become a familiar site for commuters and visitors to the city, including its iconic milk float which has just had a makeover.

Since the introduction of the Cleansing Team three years ago today, their work has been invaluable, and we see the difference they make to the city centre every day. We are putting them in the spotlight this Valentine’s Day to say a big thank you and show our appreciation for their hard work and the positive impact it has for those working, living, and visiting the city centre. Valentine’s Day is the perfect opportunity show Bristol some love – we encourage everyone to share their love for our city on social media using the hashtag #LoveBristol.

May was another busy month for our cleansing team with two bank holiday weekends.

April was another busy month for our cleansing team.