The team worked incredibly hard before, during and after Bristol Light Festival, making sure the city was looking its best every day for the 170,000 visitors the festival attracted to the centre.

Following a recent increase in use due to good weather, resulting in build-up of waste, the team did an excellent job in a thorough deep clean of the Harbourside locations. 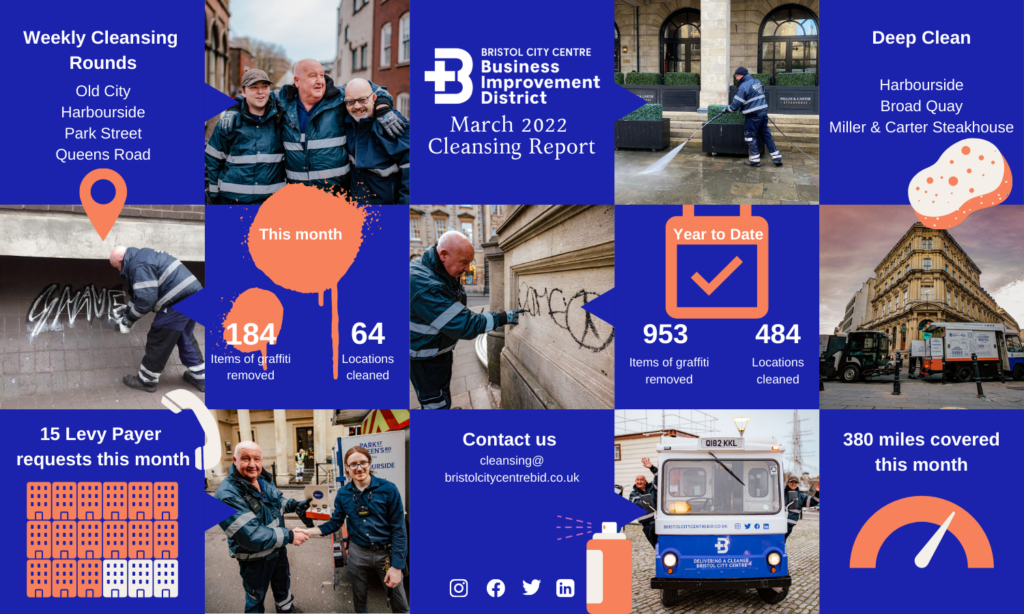 Additional cleansing and removal of waste and unwanted graffiti was completed following several levy payer requests. The team also did a brilliant job of deep cleaning and clearing the areas surrounding the Bristol Marriott Royal Hotel as part of the Great British Spring Clean campaign.

There was again a notable number of graffiti tags across several hotspots with a total of 184 items of graffiti in over 64 different locations. The team are working very hard to remove unwanted graffiti promptly and efficiently, ensuring that levy payers building facades and windows next to street furniture and other locations are restored back to a clear state.

Help us reduce prolific graffiti by reporting criminal damage to the police via their online reporting system. Don’t hesitate to contact us with any unwanted graffiti you need removing or any other cleansing issues you need support with.

April was another busy month for our cleansing team.

Roses are red, Violets are blue, Bristol is gleaming and it’s all thanks to you!